Two recent articles combine both issues around risk and politics. So that's a double hit. Then when we consider that they also incorporate the issues of eating and drinking - well! How could we resist.

The central theme of this post is risk - and which political system delivers better outcomes to it's people.

First, a paper published in the Lancet, a UK medical journal, achieved some comment because it laid the blame for a sharp fall in life expectancy in the former Soviet Union at the door of a sharp change to a market-based economy. Link.

The Economist, no fan of modern Russia's lack of democracy - any more than it was a fan of it's historical lack of democracy, finds that the correlation cannot be made to fit. Critically life expectancy rose at times of the greatest adjustment. Astonishingly, at one point it rose by three years because of an unpopular public health campaign against drinking. This makes it look like it was moving in response to other factors.

Emigration would be one that I would suspect, as younger, fitter people, with better prospects chose to exercise a sudden new freedom - to leave. One could claim this was a failure of a sudden switch to a market-economy. A kind of price signal - the 'price' of staying in Russia was just too high for many, who saw a better deal elsewhere. But perhaps it would be unfair to lay this at the foot of the change, but rather it should be blamed on decades of repression.

The final cut probably came from comparing the life expectancy patterns of a number of economies that converted quickly to a market basis. Here's our chart for your information, and you can be the judge. 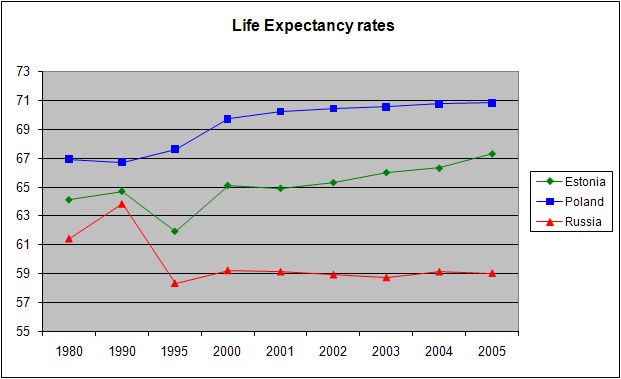 Part two of this post relates to health services. Peeping out of the letters page in the publication we've mentioned already there was a note from someone complaining that an earlier article had dared to say that it's 'ridiculous' to say Cuba's health system is better than that of the United States - ridiculing that claim made by Michael Moore, author and film-maker.

The author of the letter pointed out that the WHO rated Cuba's system 39th and the US system 37th. A further comparison on a cost basis - might as well capture costs as well as benefits - shows that Cuba spends a tiny fraction of the money (even as a percentage of GDP it's around half) than the US does to achieve a result only a tiny fraction behind that of it's wealthy neighbour.

To complement this picture I give you again life expectancy.

Here the situation is more difficult.  Clearly the commies are very nearly as good at keeping you alive as the capitalists. If freedom means you get only marginally better healthcare does that mean it's not good for your wealth?  But then again the yanks are much, much wealthier than the Cubans, so that's not it either. Perhaps one reason why life expectancy is so good is you don't have the freedom to get fat - or the income to indulge in any number of unhealthy pursuits.

So this can't explain everything about the attractiveness of the two places. The US regularly gets escapees from Cuba paddling across the sea to join them. Cuba gets new people deposited in Guantanamo by extraordinary rendition, by the US. In spite of cheap healthcare Michael Moore went home. Perhaps we have underpriced the value of the freedom to get fat, another quality Mr Moore does not remark upon.

The comments to this entry are closed.

Blog powered by Typepad
Member since 08/2004